Large-field fantasy football tournaments at DraftKings attract a lot of novice money. Folks who are learning the ropes are seduced by the huge prize pools. That’s understandable. Some of the tournaments offer $1 million or more in cash prizes. It’s hard to resist that kind of money.

Here’s the problem: tournaments are highly unpredictable. There’s a large degree of variance, which impairs your ability to draft a lineup you can count on to win. That’s why daily fantasy experts recommend taking big risks when drafting players. There’s no other way to cash in tournaments.

By contrast, 50/50s are much more predictable. They’re also more profitable, even though you stand to win less money in each contest. With that in mind, I’ll give you 7 rules for winning 50/50s below so you can make them a big part of your fantasy football experience at DraftKings. 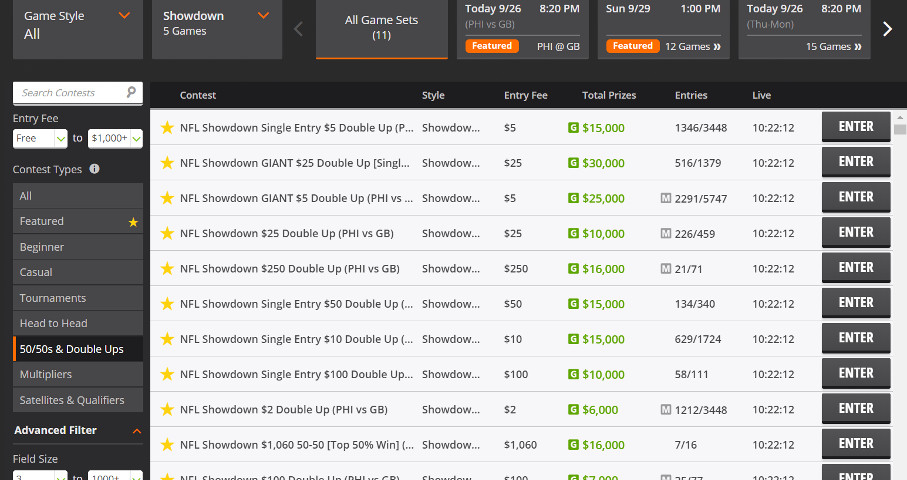 The Cash Games – 50/50 leagues pay the top half of the field double their buy-in (minus a vig).

Two basic principles define a 50/50 (also called a double-up). First, half the field wins a payout. A contest with 100 team owners will have 50 winners.

Second, each of the winners is paid the same amount. Assuming 100 team owners, the first-place winner will earn the same payout as the person who finishes in 50th place.

Those two principles are going to heavily influence your draft strategy. If you plan to spend a significant amount of time competing in 50/50s, it’s essential that you learn how to approach them.

That’s what we’re covering below.

Playing in large-field tournaments at DraftKings is like playing the lottery. When you enter a contest, you assume that your chances of winning are slim. A lot of people are going to enter and few are going to win. How else would it be possible to pay a $27 entry fee and have a shot at winning $1,000,000? (DraftKings’ NFL $2.2M Millionaire Maker costs $27 to join and pays $1 million to the first-place winner.)

That said, someone is going to win and that person is going to make a lot of money. Again, just like a lottery.

Competing in double-ups is a different story. It’s a bit like buying insurance. There’s a lot less risk since half the field gets paid. In addition, as mentioned above, everyone gets paid the same amount. That means you don’t have to worry about your lineup getting trounced by the first-place winner. It doesn’t matter. You just have to make the cutoff, or in other words, finish in the top 50%.

So, what’s the lesson? Focus on players who can be counted on to accumulate points. Don’t take huge risks, drafting overlooked players in the hopes they’ll have an explosive performance this week that helps you to finish in first place. There’s no incentive to take that kind of risk in a 50/50. 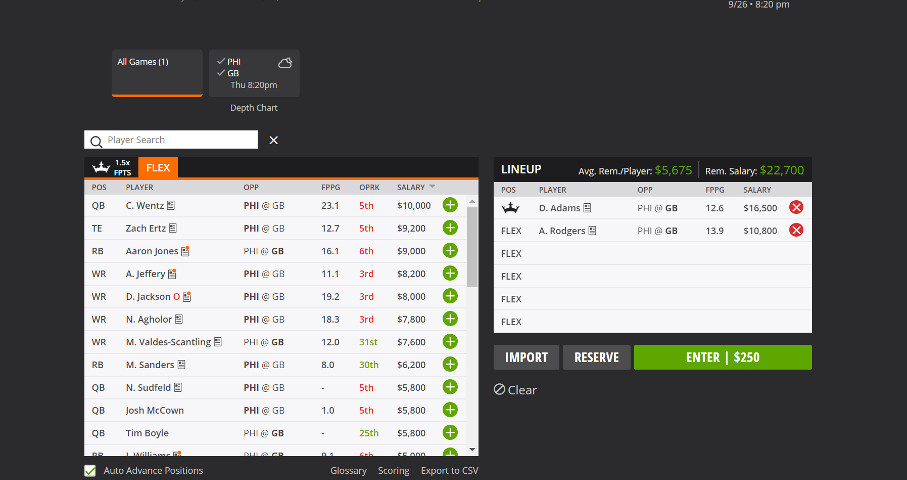 If you’re drafting players who are expected to accrue a lot of points, expect other team owners to draft them too. Players like Antonio Brown, Aaron rogers, Drew Brees, Todd Gurley and Adrian Peterson attract a lot of attention. They tend to have high ownership percentages week after week because they’re reliable.

Team owners expect Brees to complete 70% of his passes and log at least 5,000 passing yards this season. They expect Gurley to rack up a huge number of rushing yards as he is the team’s top running back.

Don’t be turned off by the fact that a lot of your competitors own the same players you own. If anything, the high ownership percentages validate the foresight of your draft picks. In a double-up contest, you need to build on a foundation of guaranteed points.

To be sure, drafting a stud quarterback like Brees or Rogers makes sense since a large percentage of the field is likely to own those guys (see #2 just up above). But be more selective when shopping for wide receivers and running backs. DraftKings allows you to pick whatever positions you want on some of these contests and they’ll all just get called “flex” on your team.

Fill one slot for each position with a stud. Fill the remaining slots with value plays. Look for players who have salaries that are lower than expected given their track records.

For example, maybe they’re coming off the injured list and no one expects them to do much this week. Maybe they had a tough time on the field last week, causing team owners to sour on their short-term prospects.

Such players often pose enormous value because everyone discounts them.

A lot of one-week fantasy football players gravitate toward small double-ups (those with 10 or fewer entrants). They assume that competing against a smaller field increases their chances of winning.

In reality, the opposite is true.

Half the field is going to get paid, regardless of the number of people who compete in the contest. The key thing to remember, and the detail that most people forget, is that the bigger the field for a double-up, the smaller the variance.

For example, let’s say you join a double-up that involves 4 team owners. You need to beat 2 of them in order to cash. With such a small field, there’s a massive degree of unpredictability. You need to finish in first or second place to win. If two of the team owners get lucky and score more points than you, you’ll lose.

By contrast, suppose you join a double-up that involves 100 team owners. Although you need to beat 50 of them to cash, you’ll face less variance. The greater number of entrants smooths the scoring curve. It makes the outliers less significant. It won’t matter if 3 or 4 team owners outscore you. It won’t even matter if 30 or 40 of them outscore you. You just need to finish ahead of the bottom 50.

Playing in 50/50s at DraftKings can be a great way to build your bankroll and earn a consistent profit. But it’s not easy money. You still have to know what you’re doing to beat other team owners. Use the tips we’ve covered above to design a draft strategy that gives you an edge over your competition.

Why might a player you drafted suddenly be dropped from the week’s schedule? He might have gotten injured. Or he may have been arrested (that’s happened numerous times in the past). If you neglect to replace him, you’ll earn zero points for the slot he fills.

A half-hour before game time, double-check that each player on your roster is still scheduled to play this week. It only takes a few minutes and you can save yourself a world of heartache.

Any player can have a bad week. By the same token, any player can turn in an unexpectedly good performance. Don’t let the previous week’s numbers have too great an influence over your draft decisions.

Research how each player you’re thinking about drafting has performed so far in the current season. How did they perform last season? You’re not interested in guys who turned in an exceptionally good or bad performance last week. You need players who have a consistent track record.

In 50/50s, predictability is crucial.

A lot of beginners think of double-ups as an easy way to grind out a profit playing weekly fantasy football. After all, you just need to finish in the top half of the field. How hard can that be?

As it turns out, it can be plenty hard, especially if you’re just getting started. Remember, half of the field is going to lose. What distinguishes you from the bottom half?

It’s also worth noting that a lot of experienced fantasy football players compete in 50/50s. These are guys (and gals) who know what they’re doing and have the winnings to prove it. You need a solid draft strategy if you hope to compete successfully against them.

It helps to stick to larger 50/50s. Not only is there less variance, but there’s also a greater likelihood that a majority of the field will be composed of inexperienced DFS players.

In addition, if you’re just starting, stick to double-ups with low entry fees. Most of the experienced players compete in contests that impose bigger buy-ins and offer bigger cash prizes.