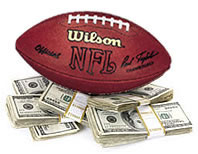 Does the idea of using Las Vegas odds in your fantasy football drafts fill you with dread? Do you cringe at the thought of perusing NFL football betting lines before selecting players for that week’s lineup at DraftKings and FanDuel?

You’re not alone. A lot of fantasy team owners shudder when they think about using the lines set by Vegas oddsmakers. Doing so seems like too much work and they do not know what they are looking for exactly, or even where to look.

That opens up a nice opportunity for you. By reviewing the numbers predicted by oddsmakers, you’ll gain a healthy advantage over your competition. That could spell the difference between winning and losing your next contest.  The best part? Using Vegas odds in your daily fantasy football drafts takes a lot less work than you might imagine. It’s essentially a matter of knowing what to look for.

Today, we’ll cover some of the numbers you’ll see when you look up lines on the current week’s NFL games. You’ll also learn which numbers to focus on, as well as which ones to ignore, when you draft players.

Related article about how to effectively use Vegas Odds with fantasy NBA. Have you tried out FanDuel or DraftKings yet? They offer legal, one week fantasy contests that pay out instantly. No more season long waits to get your cash. See this weeks Vegas Odds Now!
Also, we’ve recently started to use Monkey Knife Fight! Click here to check out the review!

The Moneyline And Point Spread: What Do They Mean?

A moneyline reflects which team is expected to win. The favored team has a negative number following its name. The underdog has a positive number. For example, here’s the line (at the time of writing) for the Titans and Jaguars game for week 3 of the 2019 season:

A point spread reflects not only which team is expected win, but also the number of points by which it is expected to do so. The spread for the Ravens/Chiefs game is currently listed as follows:

At this point, you might be confused. After all, the moneyline and point spread are based on the collective performances of the opposing teams. How do you use that information when selecting individual players?

Be patient. We’ll get there in a moment. First, we need to talk about over/unders.

Over/Unders In One Week Fantasy Football

An over/under reflects how many total points oddsmakers believe will be scored by the two opposing teams. The over/under for the Ravens/Chiefs game is currently 52.5. That means Vegas oddsmakers are predicting that the teams’ combined scores will equal 52.5 points.

Here again, you may be thinking, “That’s great. But how do I use that number when deciding which quarterback, receivers, running backs, and tight ends to draft?”

NFL Player Prop Bets: What Are They?

A prop bet (or proposition bet) is a type of wager placed on whether a particular event will occur during a game. For example, will Andy Dalton throw 2 touchdowns for the Bengals? Will LeSean McCoy rush 87 1/2 yards for the Chiefs?

Like money lines, points spreads and over/unders, player prop bets can influence your draft selections. But you have to know how to use them in order to make informed and inspired decisions.

Which Odds Should You Use For An NFL Fantasy Line-Up?

The answer depends on how much time you’re willing to invest into a draft. Some fantasy players are content to just look up the over/unders for that week’s games. A high O/U implies that the opposing teams are going to score a lot of points. That being the case, it makes sense to draft one or more offensive players from the two teams.

The problem with that approach is that it only gives you a limited view. It’s like trying to drive your car while looking through a toilet paper roll. You can see, but you’ll miss the bigger picture.

First, you can confidently ignore the moneyline. It won’t tell you anything more than you can learn from the point spread – at least not in terms of your draft decisions.

Second, it’s definitely a good idea to incorporate the point spread into your draft. I’ll explain how in the next section.

How To Use Vegas Odds In Daily Fantasy Football Drafts

Let’s take a closer look at the over/under for the Ravens/Chiefs game. As noted earlier, oddsmakers have set it at 52.5.

By itself, that number doesn’t reveal much about the upcoming game or the individual players that are expected to get time on the field. The over/under indicates a lot of points are going to be scored, but leaves a lot of unanswered questions. For example…

Also, suppose the over/under was set at only 40. Besides suggesting that fewer total points would be scored during the game, what would the lower number imply about individual player performances? You can see how relying solely on the over/under can lead to problems.

Let’s take a look at how to eliminate – or at least minimize – those problems.

Recall that the O/U for Raves/Chiefs game is 52.5. From earlier, we also know the point spread is +/-6, with the Ravens favored by 6 points.

The first step is to figure out how many of the projected points for the night (52.5) are likely to be scored by each team. The math is simple. For each team, divide the over/under in half and subtract half the spread. Here’s the calculation for the Ravens:

Here’s the calculation for the Chiefs:

Based on Vegas oddsmakers’ predictions, we can forecast that the Ravens will score 23.25 points and the Chiefs will score 29.25 points.

The second step is to determine which positions are likely to produce the night’s points. Close games with a high O/U often see the QBs making TD passes. That’s probably going to be the case with the Ravens and Chiefs. Both teams’ quarterbacks are likely to rely heavily on their respective receivers. If you were going to draft players from one or both teams, that’s where you’d want to focus your attention.

But suppose the point spread is larger than +/-6. Let’s say Vegas has set it at +/-9. Here, you might see more action from the running backs, especially if either team is trying to run minutes off the clock. That’s something to consider when creating your lineup.

You may be tempted to cut corners while looking up Vegas odds. We already covered an example of doing so: using only the over/under to anticipate which players are likely to rock in that week’s games.

Resist that temptation. Otherwise, you’ll only be working with one piece of the puzzle. Without knowing the point spread, it’s too easy to make poorly-informed draft decisions.

Visit Bovada to retrieve the latest Vegas lines. Look for the over/under and point spread for each of the current week’s games. Write the numbers down for easy reference. Then, log into your accounts at DraftKings and FanDuel, and use the numbers you collected from Bovada to create your lineup.

It goes without saying that using Vegas odds is not a guarantee that you’ll win your daily fantasy football contests. The odds are not magic. But they can reveal opportunities you can exploit to build a highly-productive – and profitable! – fantasy squad.