Attention soccer fans, DraftKings now offers fantasy soccer! You can play real money fantasy futbol online at DraftKings for real money legally. Draftkings is legit and legal and you can really play and win real money online. This page will explain how to play and how to get started.

How To Play Fantasy Soccer on DraftKings – How it Works 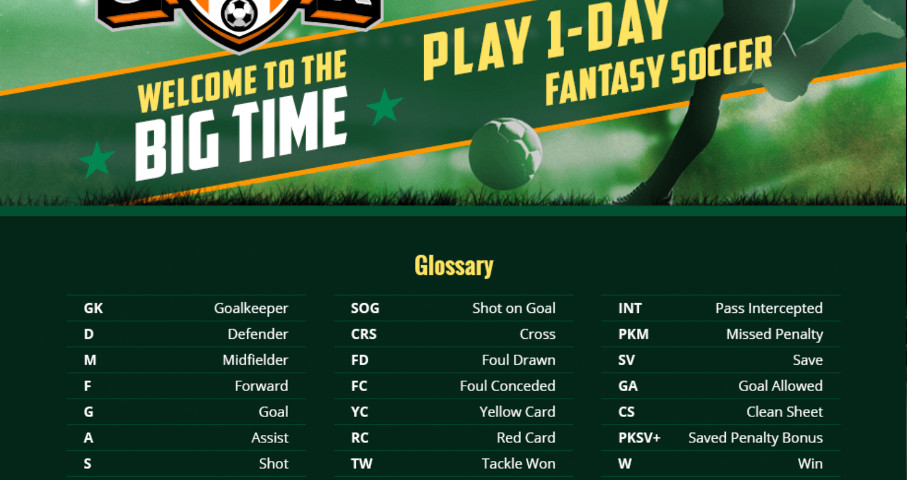 The glossary the way DraftKings shows it for Soccer Lineups.

Soccer works in the same way as other Daily Fantasy Sports with a salary cap of $50,000 for the roster. Each roster has eight players, with two defenders (D), two midfielders (M), two forwards (F), one Flex player (UTIL) (this player can be a defender, midfielder or a forward) and a goalkeeper (GK). Each roster of eight players may only include three players from one team.

Now you’re going to need to know how these players are going to be earning those sweet, sweet points for your chosen team. This is the way they do it over at DrraftKings.

And for the Goal Keepers, the scoring table is as follows –

Goalkeepers and defenders must play at least 60 minutes to be awarded the clean sheet or one goal allowed bonus, the same 60 minutes needed for a goalkeeper to qualify for a win.

DraftKings will offer live scoring throughout the contest, the points awarded based upon the information the site has received from their official stats provider. These points are for information purposes only and could be liable to change, up until the official scores and results are posted at the conclusion of the games.

When playing DFS on the NFL, the NBA, the NHL and MLB you’ll find a great many stats that you’ll be able to call upon to select your players, however soccer over the years has suffered in this respect. Up until around a decade ago, the only statistic available in the game was how many goals a player had scored, or how many clean sheets a goalkeeper has (try finding out how many assists a player had in 1985/86 and it’s not going to happen).

This has changed immensely in recent years, with the advent of many sites tracking a great variety of measurable stats.

Now you’ll instantly know how many passes a player has made and the percentage of those that have been completed, how many dribbles a player has made, the total distance they have covered in a game and in which area of the pitch the player spent the majority of the match. Obviously you’ll not need all of this information when selecting a roster, however if you want an edge, you’ll use as much information as you deem important.

There are many sites who offer stats on players, many of these sites making use of the excellent statistics generated by Optasports.com. You might find the following site is a great resource for DFS.

Check out www.whoscored.com This site specializes in individual statistics on players. During every live game (they feature all Premier League and Champions League games, as well as many other leagues around the world) they’ll rate the players out of ten on a live basis, basing the rating on a number of performance pointers.

Individual player information on the site includes appearances, goals, assists, yellow/red cards, shots per game, pass success %, aerial duels won per game and the average rating. You’ll also see the strengths and weaknesses in a player’s game as well as the style of play – for example current Premier League top scorer Diego Costa is listed as a “Strong” at Finishing and Headed Attempts, and “Weak” at offside awareness and discipline, and his style of play comments point to the fact that he ‘likes to dribble’ and ‘gets fouled often’.

You’ll find many contests on offer every week at DraftKings.

Looking around, you will see that you can filter these contests by style, entry fee, prize, number of entries, and starting time to make sure that you are able to find the style that supports you particular needs.

And before you leave, make sure that you also take a look at these as well!