The Barclays is the opening event of the Fedex Cup playoffs with the top 125 in the season’s standings eligible to compete. At the end of the event, only the top 100 will move onto the Deutsche Bank Championship, so like last week, there will be interest at both ends of the leaderboard.

The Barclays at Ridgewood Country Club

Being a playoff event, all of the top players in the world are here this week. Adam Scott defends after his win in this event last year, whilst Henrik Stenson looks to defend his Fedex Cup title. All eyes however will be on Irishman Rory McIlroy who will look to continue his stunning run and bag a fourth straight win. Rickie Fowler and Sergio Garcia look to have been the two closest rivals to McIlroy in the previous three events and will both be looking for an elusive win. Justin Rose, Jim Furyk, Matt Kuchar, Bubba Watson, Jordan Spieth and Phil Mickelson are other notables in the field. Dustin Johnson (leave of absence), Jason Dufner (neck) and Steve Stricker (family time) are the only qualified players not competing this week.

DraftKings is my favorite fantasy golf site. Real money leagues start at $0.25 and virtually everyone plays in the $2 PGA Chipshot every week. Give DraftKings PGA a try this week. Line-ups must be in EARLY Thursday mornings.

The Barclays is being played at the Ridgewood Country Club this year, having last been played there four years ago. The club actually has three nine hole courses, with the Barclays course being made up of the more difficult holes on each course. The course is 7319 yards long and has a par of 71.

Ridgewood CC has hosted the Barclays twice. In 2010 Matt Kuchar took the title and Vijay Singh won the event in 2008 – both tournaments needing extra holes to find a victor. This event was played at the Liberty National last year and Adam Scott won by a shot. Nick Watney won the tournament in 2012 at Bethpage Black.

What the Stats Tell Us 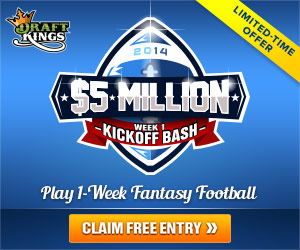 Using statistics is a difficult one this week as the course hasn’t hosted a tournament for four years and only three PGA tour have ever been played here. Because of this, I’ll concentrate on players in form this week.

Rory McIlroy – An obvious pick but it’s hard to look past the man from Hollywood, County Down. After something of a struggle last year, McIlroy looks like being the
most dominant player in golf since Tiger Woods was winning week in, week out. Fatigue might be a problem this week, but the same thing was being said before both the Bridgestone Invitational and the US PGA.

Sergio Garcia – Eight top ten finishes in sixteen events this year see a player back to his very best. Runner up to McIlroy in both the Open and the Bridgestone
Invitational, Garcia is up to number four in the world and is battling with Henrik Stenson for the ”best player never to win a Major” tag. Expect another big week.

Jim Furyk – Furyk is possibly the surprise of the season. Without quite registering a win, Furyk has been in the thick of the Sunday action week after week this year with three runners up spots and eight top ten finishes. A year ago Furyk had slipped to number 32 in the world, but he is back to number six and has qualified for the US Ryder Cup team. Perhaps the most solid pick of the week.

Jason Day – Day hasn’t played much golf this year, but when he does appear he is in the mix. Having won the WGC Match Play back in February, he has since has a top five finish in the US Open and a top twenty in the PGA Championship. Day is now back to fitness and his world ranking of nine might look a little low in a few months’ time.

Webb Simpson – Simpson is being talked up as a potential wildcard pick for the US Ryder Cup team and is hitting form at the right time. Since June he has had three top
five finishes including last week at the Wyndham Championship. This is a player who knows how to win under pressure, winning both the US Open in 2012 and a
Fedex Cup playoff event in 2011.

Nick Watney – Watney has had something of a mixed season, but the last four tournaments have seen a big improvement. 12th, 8th, 33rd and 5th place finishes see a player on the rise and seemingly focused on the Fedex Cup. His good finish last week saw him move up to 94th on the Fedex Cup list and will need a solid week to move on to next week.

Geoff Ogilvy – Sleeper – Four or five years ago it would have been amazing to describe Ogilvy as a sleeper. A Major Champion and three times winner of a World Golf Championship this was a player at the top of the game. Just three weeks ago he was down to a low of 216 in the world rankings, however a surprise victory in the Barracuda championship has given Ogilvy a new lease of life and a place in the Fedex Cup playoffs.

Ricky Barnes – Sleeper Ricky Barnes was the “next big thing”, until the next “next big thing” came along. Barnes has since become something of a journeyman on the PGA tour, a tied 2nd in the 2009 US Open the highlight of his professional career. This year Barnes has been somewhat solid with just six missed cuts in twenty three events and 8th and 24th place finishes in his last two tournaments. Barnes sits at 105th in the Fedex Cup standings so needs a good performance to proceed in the playoffs.

Understandably, Rory McIlroy is the strong favorite for the Barclays. Adam Scott sits second, with a group containing Sergio Garcia, Henrik Stenson and Rickie Fowler just behind. Other players deemed in contention by the sportsbooks are Justin Rose, Jim Furyk, Matt Kuchar and Jason Day.

You can check the most up to date Vegas odds here at Bovada which is the #1 online sportsbook for US players as ranked here.