Daily fantasy basketball is taking off this year. The reason? Fans of the game have an edge against the field. That means if you actually watch basketball and keep up with the teams then you have a legitimate shot at winning one of the huge money contests available each and every week.

NBA basketball is arguably one of the best daily fantasy style contests for the FANS OF THE GAME to play. Unlike baseball where it is a stat driven game, the avid NBA fan will know who’s hot when and be able to find those values. With that said, let’s get to the biggest and best daily fantasy NBA contests offered at our top sites.

Play The Biggest Tourneys On Wednesdays

Did you know that Wednesday is the big day for daily fantasy baskeball? While Sunday rules the roost during football season, Wednesdays are the days the big tournaments roll out at the major fantasy sports sites. Here are the breakdown for NBA promos for February 2014. 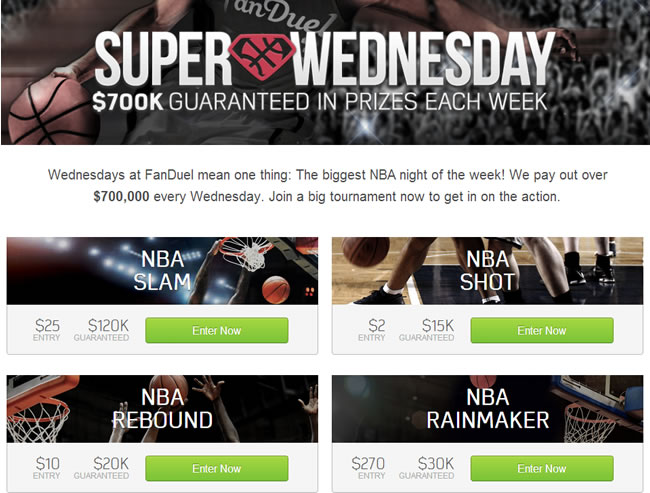 Wednesday’s are the biggest day of the week for NBA

The Big Lineup At DraftKings

$500k Fantasy Basketball Championship – DraftStreet – A survivor style contest beginning on March 11th, playing three days and finishing on March 14th (no games on the 13th). You have to qualify by winning a 1 day NBA fantasy league with 3 qualifying chances every week and satellites to the qualifiers running daily. Just win one qualifier and you are in. 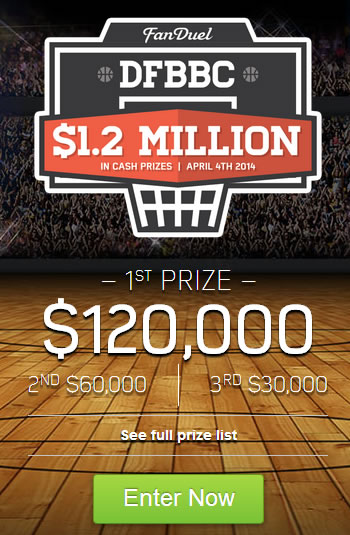 The Biggest NBA Tourney in 2014

FanDuel Fantasy Basketball Championship “DFBBC”– With a whopping $1.2 Million in total guaranteed prizes this is the largest daily fantasy NBA tournament of 2014. Rightfully so from the largest daily fantasy sports site on the market. First place takes home a six figure score of 120k. It is a massive tournament that takes place in April 4th with qualifiers running now.

Ready To Play? Visit The Sites Below