We throw around a lot of terms and abbreviations in daily fantasy and assume everyone is familiar with them. The truth is, many terms can be absolutely baffling to a beginner. It’s almost like learning a new language.

Some phrases are easy to deduce. For example, your “bankroll” is the money in your DFS account. Others seem clear, but are actually kind of murky when you apply them to daily fantasy. For example, you intuitively know what “upside” means. But what does it mean in the context of DFS? And some terms may be vaguely familiar to you, but are practically indecipherable without your notes from your college probability classes.

If you’re just now getting involved with one-week fantasy football, the terminology alone can make it seem like you face a tough, uphill battle. Don’t worry. I’ll help you to get over the hump by defining the 8 phrases that give newbies the most problems.

Note: what follows is not meant to be an exhaustive daily fantasy sports glossary. Instead, we’ll focus on the most puzzling terms that pop up in articles about fantasy football draft strategy and player analysis. You may already be familiar with several of them. But there are probably a few you need to add to your working lexicon. 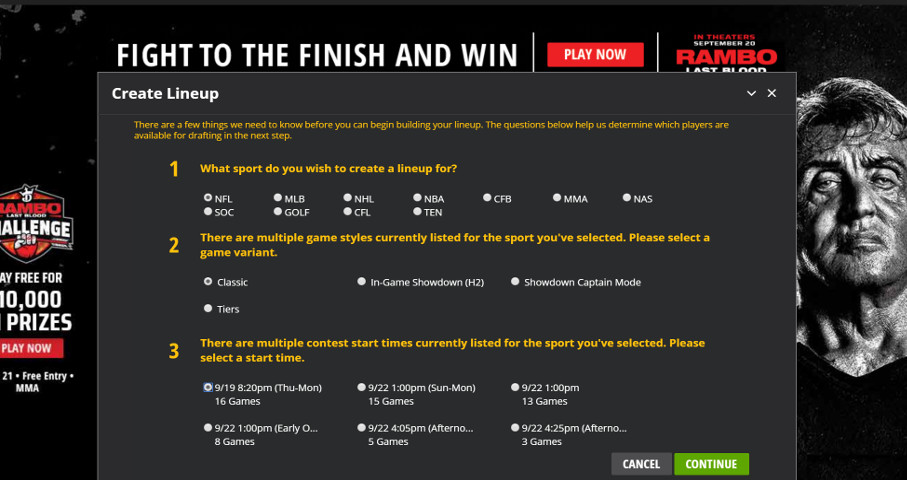 When you decide you’re ready, you can go to DraftKings, click “Create a Lineup”, and after a couple clicks of choices, you’re ready to go!

By the way this term gets mentioned in almost every discussion about daily fantasy, it might seem as if you’re the only one who doesn’t know its definition. Don’t be fooled, though. There are a lot of DFS players who nod their heads when upside is brought up, but aren’t completely sure what it means.

At its most basic, upside reflects potential.

Consider a 2nd-string running back with a low salary. His salary implies that few team owners expect him to deliver a ton of fantasy points. But let’s say you’ve discovered he’s likely to get a lot of field time due to the starting RB suffering an injury.

The 2nd-stringer now has a lot of potential. He has upside.

Some elite players who score a lot of fantasy points from game to game can also offer significant upside. But such players are tough to find. In most cases, their salaries are already in the upper stratosphere, which means their expected point production is already being taken into account. There’s room for them to outperform expectations, but seldom by much.

Key Point –
Upside is important if you’re competing in large-field tournaments. You need a lot of potential in point production to finish in a winning position.

One way to think of consistency is that it’s the opposite of upside. It reflects the degree to which a player produces fantasy points within a specific range.

For example, suppose you’re thinking about adding Tom Brady to your roster. He has performed well in his last few games. But you’d want to know how consistent his point production is before putting him in your lineup. Just because he recently threw 5 TDs against the Jets doesn’t mean he’ll post that level of production in this week’s game.

The truth is, he’s not as dependable as Drew Bees or Patrick Mahomes II. But he’s far more consistent – at least he has been during the 2019 season – than guys like Russell Wilson or Philip Rivers.

Key Point –
Consistency is important in cash game, such as 50/50s. You’re not looking to shoot out the lights. You don’t need to take big risks. To win, you just need to beat half the field by a few points. 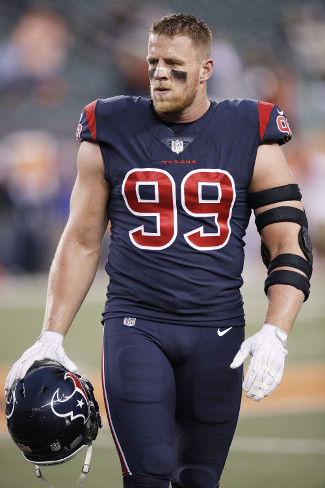 You don’t have to pick this guy, but if you don’t, he’s coming to your house to kick you ass!

Along with ceiling (see below), floor is the easiest term on this list to understand. Even if you’ve never played weekly fantasy football, you can probably infer its meaning.

It reflects the worst possible outcome of adding a given player to your roster. For example, if you put Russell Wilson in the QB slot, what is the least number of points he’ll produce for you this week?

A guy like Wilson, who regularly turns in over 20 fantasy points per game, may have a floor of 10 points. While there are no guarantees in DFS, you can count on Wilson delivering at least that many.

In comparison, consider a pass-thrower like LA’s Jared Goff. He hasn’t done much in the QB slot this season. Technically, his floor is close to zero.

All things considered, you want to roster players with high floors over players with low floors. But of course, the draft isn’t that simple. You have to take into the account the degree of risk you need to shoulder when competing in different game formats.

Key Point –
A higher floor is valuable in cash games where you value consistency. It’s less important in large tournaments where risk and variance (see #6 below) player larger roles.

Ceiling is the opposite of floor. That’s probably obvious. But let’s clarify its meaning as it pertains to weekly fantasy football.

A player’s ceiling reflects the greatest number of fantasy points you can expect him to produce for you during any given week. As a daily fantasy concept, it’s similar to upside. But it’s expressed differently. Upside is expressed as percentage growth in point production relative to expectations. Ceiling is discussed in terms of a specific number of points (similar to floor).

High-ceiling players are obviously more valuable than low-ceiling players. They’re the ones who rack up a considerable number of fantasy points game after game. But like floor, making use of this metric isn’t quite that simple.

Key Point –
It’s most useful if you’re playing in tournaments. You want to draft players who might lead their positions in fantasy points.

Value is a tricky concept in fantasy football. Everyone intuitively understands its meaning. Essentially, it means you get a great deal. You receive more than you paid for.

For example, if you can pick up Cam Newton for $6,000, that’s a lot value given his season track record. By contrast, if Alvin Kamara has a salary of $8,000, he’s probably not a tremendous value (though he might still be a great addition to your lineup).

This metric is often expressed as the amount of cash you have to pay for each point the player you’re drafting is expected to score. We’ll go over how to calculate this figure in a few moments (if you’re in a hurry, jump to #8 below).

Key Point –
For now, suffice to say that value is a measure of a player’s salary in light of his expected point production.

This metric is one of the most difficult for novice fantasy football team owners to understand. It’s closely tied to value and consistency. In essence, it reflects the degree to which a player’s fantasy point production changes from one week to the next.

How might you leverage this metric when creating your lineups? Here’s an example:

Suppose you’re looking to fill one of your roster’s wide receiver slots with a value play. While analyzing players, you stumble on a pass-catcher who has been playing with an injury. As a result of his injury, he hasn’t caught many passes or scored many TDs. His salary is likely to be low due to his lackluster performance.

But let’s say you learn his injury has healed and he’s scheduled to play this week. His point production will likely be noticeably higher this week than it has been in the recent past. In other words, there’s going to be a fair amount of variance in his production. That translates into value.

Key Point –
Team owners who ignore variance wouldn’t be aware of the value implied in this receiver’s salary.

Like variance, this metric is a measure of consistency (or volatility). In fantasy football, it’s defined as the standard deviation of a data set – for example, the number of points produced by the league’s top 20 wide receivers – divided by a player’s average per-game point production.

The result of that formula indicates the degree of consistency in the player’s performance. By calculating the CoV for players at a certain position and comparing them side by side, you’ll see which players have the greatest consistency.

Key Point –
The lower a player’s CoV value, the more consistent he is from game to game.

Recall our discussion of value from a few minutes ago (ref. #5 above). We noted that metric is expressed in terms of how much money you have to pay for each fantasy point. I also promised to show you how to calculate the figure.

Let’s do that now.

For illustration, visit the DraftKings’ lobby and enter one of the contests. Don’t worry. You don’t need to commit to it. You just need to access the screen that allows you to build your lineup. You can back out of the contest after we finish discussing this concept. 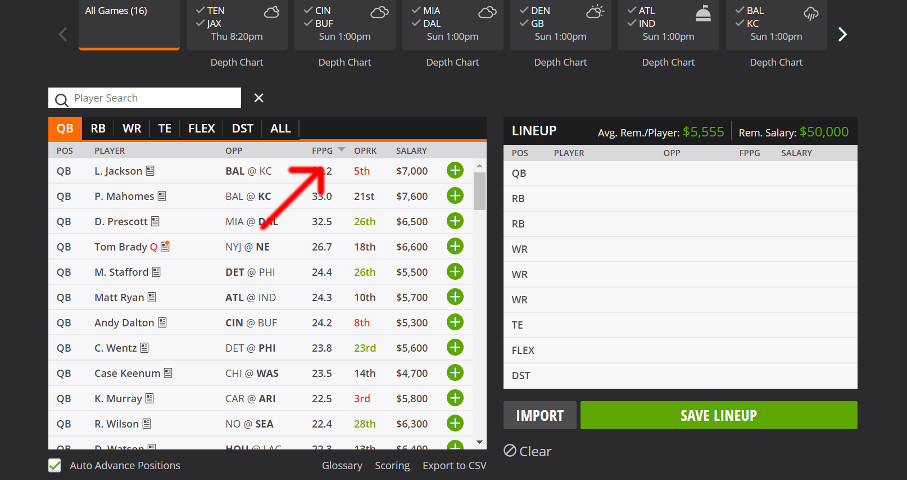 The location of the columns we’re talking about here.

Step 3: Divide that player’s salary by the number in the FPPG column. The result is the $/point metric.

Key Point –
Now, perform that same calculation for every QB on your short list. Compare the results. The player with the lowest $/point figure poses the greatest value.

Admittedly, knowing the above terms won’t necessarily make you a better DFS player. But it will help you to understand the concepts that drive draft strategy and player analysis. Then, it’s a matter of rolling up your sleeves, grabbing a calculator and crunching a few numbers. With this site as your personal guide, you have everything you need build fantasy football lineups that will earn you real cash payouts!

Come join the fun at DraftKings and FanDuel, where the biggest fantasy NFL season in DFS history is currently under way.