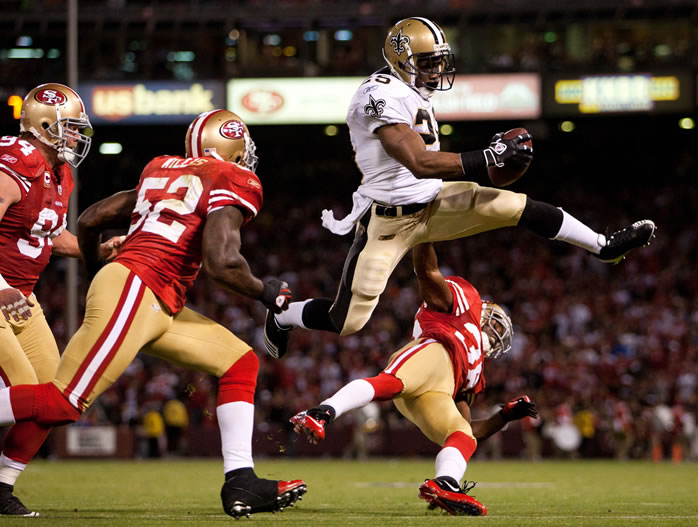 Leap into this NFL Season prepared to win!

If you’re a long-time season-long NFL fantasy player, you might think you know everything you need to know in order to win. But the one-week football contests you’ll find at places like DraftKings are an entirely different animal than the leagues you’re accustomed to. Winning will be difficult if you’re unprepared. A lot of folks who play in traditional leagues stumble when they dive into daily NFL contests for the first time.

We’ll go through the key principles of winning daily fantasy football below. Whether you’re an old hand at fantasy NFL games or completely new to them, the following guide should prove useful. Having said that, nothing takes the place of experience. Don’t get bogged down in the details. Learn the basics, create an account at FanDuel or DraftKings, and join a few low-stakes contests.

Before we go too far, let’s first get a bird’s-eye view of the most common fantasy football draft strategies. None are flawless. Each one comes with strengths and weaknesses.

So which strategy should you use? You’ll find that the best approach is to come up with your own. Remember, there are pros and cons to each of the above strategies. Don’t just adopt one “out of the box.” Get some experience under your belt and keep good notes on what works and doesn’t work.

You can play in several different game types, from head-to-heads to guaranteed prize pool (GPP) tournaments. The important thing to keep in mind is that some contest formats offer more potential than others.

Here’s a general rule of thumb: it’s easier to finish in a winning position in smaller contests than it is in large-field events, such as GPPs.

Many beginners are drawn to the big tournaments. The prize pools are large and hard to ignore. But the competition is fierce; you’re competing against hundreds of other players. You have a much better chance of winning a cash prize by competing in smaller events. Look for head-to-heads, 50/50s, and 3-player leagues.

I’m not suggesting you completely avoid the GPPs. They’re a lot of fun, even if the odds of winning are slim. Just be sure to go into them with the right expectations.

There are 2 ways to think about daily fantasy football. You can treat it like a lottery ticket or like an investment.

When you buy a lottery ticket, you don’t expect to win. You know you’re throwing your money away since there’s nothing you can do to influence the outcome.

By contrast, when you invest money, you expect to see a positive return. You know that some investments are better than others, and are willing to put in the time to find them.

Hopefully, you see daily fantasy football as an investment. You have a lot of control over your results. Given that fact, you should choose the most promising contest types, research players, and gradually refine your draft strategy.

Even if you become a draft pro, all of your effort will be wasted if you neglect to learn good bankroll management. You don’t expect every stock you buy to go through the roof. Nor should you expect to win every contest you enter. You’re going to suffer some losses. That means you need to watch your cash to avoid going belly up.

You’ve probably watched NFL games during which one team completely dominated the other team. The imbalance may have been obvious moments after the kickoff.

With a little work, you can uncover the same type of lopsided matchups in the one-day fantasy football contests at FanDuel and DraftKings. For example, suppose you find a low-performing QB scheduled to play against a defensive end who has a phenomenal sack percentage. Adding the defensive end to your lineup might boost your score.

Or suppose you draft a QB and running back who are scheduled to play against a team with a weak defensive line and ultra-slow linebackers. That might be the ticket to racking up a large number of “easy” points.

Modify Your Draft Strategy To Suit The Fantasy Site

It’s a common misconception that all DFS sites are the same. In reality, they use different scoring systems, present different player salaries, and even require that you draft a different number of players. That being the case, it’s a bad idea to use the same lineup at every site.

Some people look at the differences between sites as a nuisance. Personally, I see them as an opportunity. Here’s the reason: most DFS fans will ignore them and draft the same roster of players at each site. I know that if I put in the work, I can find ways to exploit the differences and come out ahead.

For example, DraftKings will give me 3 extra points if my QB exceeds 300 yards in passes. If I’m playing a head-to-head or 50/50 at DK, I’d be more inclined to draft Peyton Manning or Drew Brees. Both have logged a high number of 300-yard passing games in their careers. FanDuel doesn’t offer those extra points. Given that, I might decline spending the extra cash for Manning or Brees.

Every site-specific difference gives you an opportunity to outplay your competition.

This should go without saying, so I’ll keep it brief. Make sure you don’t draft injured players. That sounds like common sense, but you’d be surprised how many DFS fans forget to check the latest injury report before drafting their lineups.

If a player is injured, it’s a fair bet that he’s not going to spend much time on the field. That means he won’t produce points for you.

An hour before kickoff, double-check each of your draft picks against the most recently-updated NFL injury report. That will give you time to make last-minute changes to your roster.

Check The Weather Report For That Night’s Games

Weather can have a big influence on the way points are scored. Think of bad weather as an opportunity to outmaneuver your competition.

For example, suppose your quarterback is scheduled to play in a city that’s being buffeted by strong winds. He might be leery of making long passes. The wind will reduce his accuracy and increase the likelihood of an interception. Because your QB will be making fewer passes, he and your wide receivers would be worth a bit less to you with regard to point production.

By contrast, inclement weather tends to keep the ball close to the ground. That means your running backs will become more valuable to you. They’ll have more opportunities to earn points.

Bottom line: before creating your lineup, check the weather report for that evening’s games. Bad weather can give you a great edge over your competition.

Some are definitely better skilled than others. Some are more reliable than others. But when it comes to winning daily fantasy football contests, your selection of kickers won’t matter much. They contribute little to overall point production.

So don’t waste a lot of cash drafting talented kickers. Save your budget for your QB, running backs, and wide receivers.

In one-week fantasy football, look for defenses that are playing against low scoring offenses or look for teams that make a lot of interceptions and recover fumbles. Each of these plays adds points to your overall score. What you don’t want is a defense that costs you points by getting blown out by the other team.

Check Vegas odds and over / unders. Find a defense with a low scoring projection. You also want to avoid picking defenses that are playing against your own players as you obviously want your offensive players to score points.

There are dozens of tournaments and leagues available for you to join right now. Visit FanDuel and DraftKings.

They are by far the two daily fantasy sports sites you will want to have accounts with. They both offer amazing games and money to be won each and every week with real money fantasy football contests.