I’ve already written a couple articles that discuss the basics of salary caps in daily fantasy sports. If you haven’t read them yet, I strongly encourage you to do so. They’ll give you a proper foundation in how to draft winning teams under a salary cap. 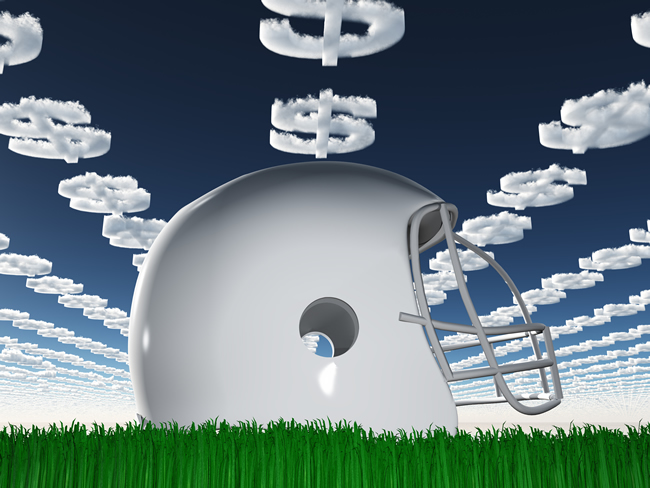 Strategy to Maximize Your Salary Cap

In this article, we’re going to jump right into the most important concepts you need to learn with respect to budget allocation in one-week fantasy football contests. We’re going to focus on where you should spend your cash.

For example, how much money should you spend on your quarterback? How much of the cap should you set aside for a tight end? When should you pay a premium for scoring predictability and when should you throw a Hail Mary at a discount?

Today, we’ll concentrate on positions rather than players.

Since DraftKings continues to be one of the most exciting places to play fantasy football, we’ll talk about budget allocation in terms of that site’s roster requirements:

Once you know how much of your budget to earmark for each position, you can drill down and find choice players to fill the slots.

There’s a temptation to fixate on top-tier players. For example, should you pick Lamar Jackson or Mahomes for your QB? CMAC for your top running back? Which receiver is more likely to produce this week: Hopkins, Julio Jones or Tyreek Hill? How about your tight end? Kelce continues to dominate, but Kittle and Ertz might blow up this week at lower salaries.

It goes without saying that doing research on players is critical. It’s tough to build a winning roster without drafting a couple guys who are leading the pack in their respective positions. If you study lineups that win fantasy football contests, you’ll see the same players appear over and over.

But before you focus on which players to add to your roster, you need to figure out how much money you should spend on each position.

It’s not just a matter of budgeting your cash. It’s a matter of allocating your money so that you’re maximizing your odds of winning.

You do that by exploiting variance…

How To Leverage Variance In Weekly Fantasy Football

A keen understanding of variance is what separates winning team owners from casual players who lose week after week. There’s a huge amount of variance in weekly fantasy football. It pays to know how to leverage it.

At its simplest, variance is an inverse reflection of consistency. The more found in a given contest, the less you’ll be able to predict the outcome. I’ll describe this relationship in greater detail in the future, but for now let’s focus on that simple definition.

Exploiting variance in fantasy football doesn’t mean minimizing it. Rather, it involves knowing the extent to which you can forecast the number of points your players will score. As we’ll discuss in a moment, a higher level of variance can often work to your advantage.

That should influence how you allocate your cash among those positions. Let’s start by taking a look at the quarterback.

Priority One: Spending Money For A Solid Quarterback

Your QB is the core of your lineup. He’s the guy who is going to handle the ball the most. That means he’s likely to produce more points than any other player on your roster.

Here’s the thing that a lot of casual fantasy football players miss about the QB position: it has the least amount of variance compared to every other position.

Recall from above that variance shares an inverse relationship with consistency, or scoring predictability. Your quarterback is likely to turn in a consistent performance each week. That means you can forecast his point production with a reasonable degree of accuracy.

His production is predictable.

If you’re competing in a contest where variance works against you – for example, a double-up – you’d want to spend a greater portion of your budget on a reliable QB like Mahomes

But suppose you’re competing in a contest where variance works to your advantage, such as in a large-field tournament. You’d want to spend less cash on a stud QB, and instead look for lower-priced – and less predictable – alternatives.

Priority Two: Adding A Solid Running Back To Your Lineup

Running backs do a lot more than just run. They also catch and block. That being the case, they have a lot of opportunities to score points.

What does that mean in terms of variance? More action typically means a greater degree of scoring consistency. The more opportunities an RB has to score, the less variance there will be in his weekly performance.

You need to fill 2 RB slots at DraftKings. In a double-up or small league, both contests for which a high degree of scoring predictability is useful, spend a little extra cash for consistent players. In a GPP or other large-field event, where variance is a good thing, reduce your spend by picking up running backs who have less-steady track records.

Finally, we come to wide receivers and tight ends. These two positions are less consistent in terms of point production than QBs and RBs. WRs and TEs might score a lot of points one week and few points the next week.

The reason is simple: receivers and tight ends don’t have as many opportunities to score as QBs and RBs.

Consider the job of a wide receiver. He catches passes and runs the ball. But unless his QB finds him over and over, he’ll have to split his scoring opportunities with a tight end and another receiver. Plus, if he’s facing a strong defense, his QB is likely to rely on the running backs to move the ball down the field.

Fewer scoring opportunities means more variance in weekly performance. That can be a good thing in a GPP tournament, where you need one or more players in your lineup to blow up. The good news is that those players often come in the form of sleepers who have low salaries.

If you’re competing in a 50/50 (double-up), that lack of scoring predictability will work against you. For that reason, be ready to pay a premium to draft guys who are leading their positions.

A Simple Formula For Buying Points Under The Salary Cap

When we boil everything down, playing weekly fantasy football is about buying points. You want to buy as many points as possible with your limited budget.

Here’s a formula for maximizing your spend:

Let’s use Mahomes as an example. His current salary is $9,900. He’s expected to post 22.9 points. Let’s plug those numbers into the above formula…

If you draft Mahomes, you’ll be paying $432.31 per point. That’s a useful metric to use when deciding how to spend your cash on other positions and players.

Unfortunately, you can’t be certain that Patrick will score 22.9 points this week as projected. But remember that there’s comparatively little variance for the QB position. That means you can have greater confidence in his production than you’d have for the projected points for a wide receiver or tight end.

See how salary allocation and variance go hand in hand?

Salary caps are easy to understand. Variance is a more complex concept, which we’ll deal with in more detail in a future article. For now, realize that it’s important to allocate your budget according to the scoring predictability of each position. QBs and RBs are easier to forecast than WRs and TEs.

Visit DraftKings and test the ideas I’ve outlined above.