How to Get Started

First and foremost, you should already know how LoL is played. If you happen to be brand new to either LoL or gaming in general, you’re in luck! There are hundreds of tools at your disposal to get started learning!

If you would like to learn more about LoL from the absolute beginning, just keep on reading. We’ll touch up on this down toward the end of the article for those complete, 100% newbies!

For those of you that happen to have a vague idea and you just need a little refresher course, the easiest thing to do would be to head on over to either Mixer or Twitch and find yourself some LoL channels to watch. Just pay attention to whichever streamer or streamers you decide you like and you’ll be following along in no time!

With this, you should pick back up on LoL in no time, even if you hadn’t been following along for a while. You’ll re-learn the basics as well as learn about any changes in-game made since you last checked it out. 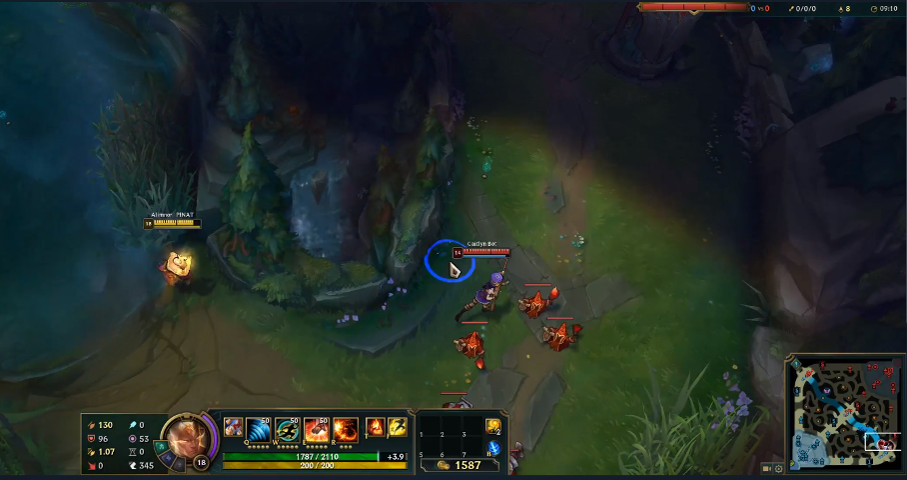 League of Legends being played by a random guy on Mixer.

Where to Gamble on LoL for Real Money 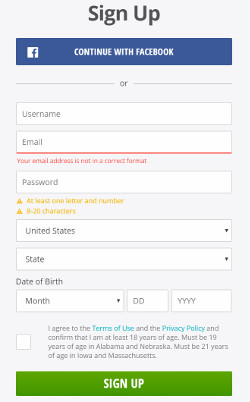 This is the sign up window at DraftKings. As you can see, just very basic information needed to join.

By far, one of the best places to play Fantasy LoL is over at DraftKings. As such, the rest of this article is going to assume that you’re going to do so!

DraftKings is not only home to some of the best Fantasy Sports you’re going to find anywhere, but they are also a home for some LoL action!

We will get more into detail about this as you read on, but their Fantasy LoL plays like other Fantasy Sports offered by DraftKings such as the NFL, MLB, NHL, PGA, (and that list goes on and on) where you are given $50k in Fantasy Cash to get your group together and go for the win!

Over at DraftKings you’ll also find,

and so much more!

If one were to go and join up over at DraftKings today, then can take advantage of a 20% up to $500 Welcome Bonus with a $5 minimum deposit, no special code needed!
And if you’re going to head on over that way anyway, why not also check out these strategies and tips to help you win at DraftKings?!

First thing you’ll do is decide on which contest you would like to enter.

When clicking on the LoL tab at the top of the selection window, you’ll be shown all of the contests that are available at the time. You’ll see options that range from “Beginner” contests for as little as $0.10 going all the way up to “Championship” games with entry fees reaching upwards of a little over $1,000. Once in a while, you may even be able to find yourself some “Free” contests if you would like to take the whole thing for a test drive before spending any real money!

Once choosing your contest, you’re taken to the Drafting Selection Screen.

This is where you’ll actually pick out your players. You get 7 of them, and you must fill out all 7 of these slots. The 7 slots are for the following positions,

This person will sacrifice many of their abilities to do as much damage as possible, especially toward the end of the game.

This role is filled by a tank or a bruiser. Good for the beginning of the game, meant to take damage while protecting the weaker players.

These players will take positions on the map known as “the jungle”. Their goal is to grab as much XP and gold as soon as possible.

These players take over the Mid Lanes of the map, hence the name. This can be held by any role, although is normally held by Assassins or ADC roles. Mid Laners will generally try to take on the traits of any of the roles in LoL, and beside the Jungler, are the only players that are able to influence the map.

Perhaps the most important role of the game. The Support Role will support the tanks to ensure they don’t take too much damage, or support the long-term Junglers to ensure they’re also to grab as much gold as possible, the Attack Damage Carry while they attempt to destroy the main target, and the list actually goes on and on. This may be the most important choice you can make depending on the play style of your chosen players.

This is the overall team you want to back up and support!

You may fill this slot with any player you would like, and they will earn 1.5x the amount of points during said game. However, once you choose a player for this slot, they cannot be chosen again for any slot. Your chosen Captain will also “cost more” than they would if filled in any other position.

What it’ll look like while drafting your team. As you can see, all of the possible players are listed on the left hand side giving you the chance to pick anyone out scheduled to play along with what it’ll “cost” to draft them.

As stated above, your chosen Captain will actually score 1.5x the regular amount of points, but the basic Scoring Table is as follows,

There aren’t many, but there are a few other special rules/notes that everyone should know.

Player Pool
The Player Pool consists of all players that are expected to play in any given game. On the off chance that a player does not play in a specific game due to injury or another unforeseeable circumstance, DraftKings will let you know by email, (if given enough time) and let you change your lineup. If not enough time is given, DraftKings will call your lineup “ineligible” and your money returned to you.

Knowing this, make sure that the contact information that they have for you is completely up to date!

Player Alias Change
Like many other eSports, a player within the world of LoL may change their name at any time. DraftKings will still honor your lineup as long as the person playing is in fact the original person you had in your lineup.

Lineup Changes
You are more than welcome to make any changes in your lineup all you want leading up until the start of the game in question. If any changes are made after the game starts in real time, the lineup will be disqualified and money will be returned.

Other Special Rules
Of course, there are other rules as well which fall under the terms of DraftKings. Make sure that when you head on over there that you check them all out at least once!

The Different Types of Contests Available 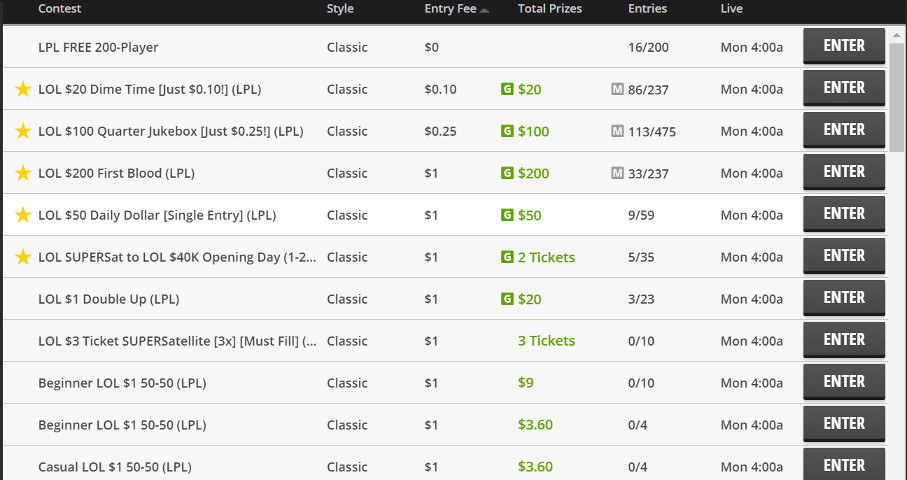 You can see a couple of things here in this image. You can see that there are some Free Contests as well as dirt cheap ones. You can also see that “Classic” is pretty much the only style you’ll find for League of Legends.

Now, because of the nature of League of Legends and it’s gameplay, you’re almost always likely to find traditional, or “classic” contests. While “Showdown” or “Tier” contests can be found, it is going to be on the very, very, rare side.

Classic
With this you’re given a salary cap and you will choose any given players to participate in your chosen contest.

Showdown
This is more for NFL type contests where someone would pick their players from only one chosen game.

Tier
Again, this is more for NFL, MLB type games where your players are chosen from a given tier with no salary cap.

So with your “Classic” contest all picked out, which will more than likely be the only option you have, your choices actually become much easier, or harder depending on whether you want to be optimistic or pessimistic about the whole thing.

Some people will want to look at this as a bad thing, having just way too many players to choose from.

Others are going to look at this as a good thing. Having an insane amount of players and having to do some actual homework on your picks as being half of, (if not more!) of the fun.

League of Legends – A Super Quick “About” for the Total Beginner 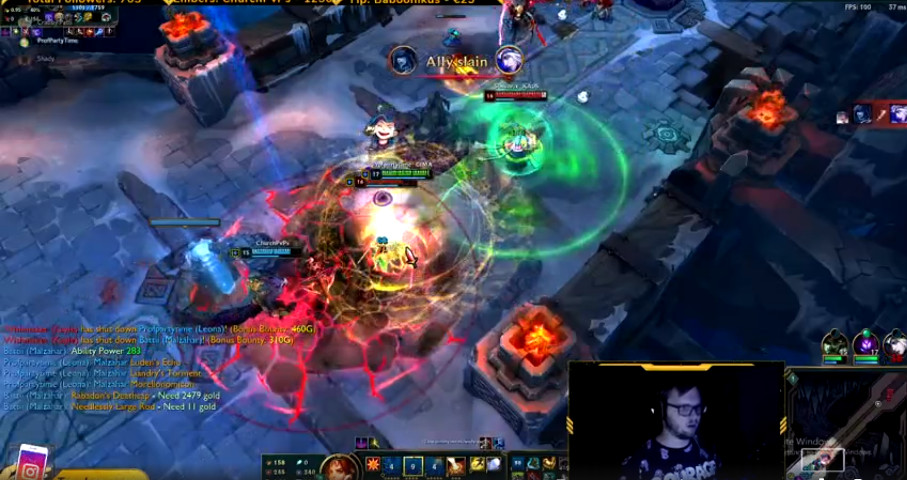 A popular streamer taking on the nexus of the “other” map.

For the complete beginner, or those that would like a super quick refresher, or you just don’t want to look into it too much for yourself, here’s a super fast 101 course.

The player, or both of these teams must traverse “the Jungle” of one of 2 maps to arrive at the opposing players Nexus while taking on and fighting the players, or the “Champions” of the opposing team as well as some Non-Playable Characters that are known as Minions and Monsters.

If playing at DraftKings, (and you should be!) there will be 7 players going up against 7 other players going for the win and the destruction of the opposing Nexus.

First, we’ll get the boring talk out of the way. League of Legends is a MOBA, (Multiplayer Online Battle Arena) developed by Riot Games that was first released in 2009 for Windows and Mac.

The base of the game is totally free to play for anyone that wants to get into it or at least just take it for a test drive and see what the big deal is with it, with Riot making their money off of microtransactions. Normally, this is a deal breaker for many gamers, many games, and many developers, however, there are exceptions to every rule and LoL is definitely one of them.

Now, don’t let the release date of this past time fool you in any way. 11 years old is pretty much forever in the world of video games, yet LoL has managed to not only keep going, but actually become stronger with an incredible fan base that has only grown more and more in this amount of time.

At this time, the user base is still strong enough to carry on both the LCS, or League Championship Series as well as the LEC, or League of Legends, European Championship, both of which have 10 teams each and play for an annual World Championship with prizes reaching as much as $4 million dollars at a time in 2017.

In October 2019, an abridged version was announced as “coming for consoles” as well as mobile devices.

The only thing left to do would be to go make your picks for you, and we’re not going to do that. As stated above, that’s at least half of the fun!

Go do your homework, get yourself some picks going on that you think are going to do well and let us know how you do!

And don’t take off without also taking a look at –