What else can you do to give yourself an advantage over other team owners?

You can crunch a few numbers. The right set of data will reveal which teams are likely to beat their opponents and which players are likely to outperform their peers.

If the thought of crunching numbers gives you chills, relax. It’s relatively easy. Yes, there’s some math involved. But it’s straightforward. All you have to do is plug a few numbers into simple formulas.

Where necessary, I’ll give you those formulas below.

In the event you need more motivation to grab your calculator, consider that a lot of your competition will avoid this “work” like the plague. If you’re willing to put in some effort (very little is required), you can exploit their negligence and gain a valuable edge. That edge can make the difference between finishing in the top of the field and losing your entry fee.

With that in mind, let’s dig into the numbers that should inform your daily fantasy NBA draft choices.

This statistic reflects how well a team defends against a position. It pays to know which teams rank at the bottom of the pile. You can use that information to draft starters on the opposing teams, confident they’ll do well.

For example, let’s say the Lakers are scheduled to face the Suns. Data show that the Lakers have struggled against the point guard position this season. That being the case, you’d want to take a close look at guys like Ricky Rubio and Ty Jerome (starting PGs for the Suns). They’re likely to do well given the Lakers’ poor track record against the position.

Defense vs. Position (DvP) shows you the number of fantasy points an NBA team allows a specific position to score. The good news is that you won’t need your calculator to come up with those numbers. You can find updated rankings online. Just Google “NBA defense vs. position stats.”

A team’s pace factor reflects the average number of times that team gains possession of the ball during a typical game. It means nothing if you’re just rooting for one team to beat another. But if you want to maximize your roster’s fantasy points, you need to take it into account.

When it comes to a team’s pace factor, a higher number is always better (if you’re drafting players from that team). The more possessions a squad takes, the more opportunities it has to score points. Fewer possessions means fewer opportunities.

Here again, you won’t need your calculator to figure out pace factor rankings. You’ll find updated numbers listed over at ESPN. Take a look at that page. A quick scan reveals that the Bucks, Pelicans, Rockets and Hawks have maintained a scorching pace of play this season. Their players have enjoyed more opportunities to score fantasy points.

You may have noticed the page I linked to above is titled “Hollinger Team Statistics.” The title refers to John Hollinger, former VP of the Grizzlies and a former analyst with ESPN, currently still working with the Grizzlies in another capacity. In addition to those team stats, Hollinger devised a useful statistic known as the Player Efficiency Rating (PER). You can find each NBA player’s PER on this page.

Expressed as a simple number, PER captures a player’s overall performance. His field goals, field goal attempts, free throws, free throw attempts, rebounds, assists, blocks and steals… all of them are expressed by a single numeric value. Higher numbers are always better.

Although blocks and steals are accounted for in the PER, the number is more useful for gauging a player’s offensive skill than defensive skill. Hollinger himself has alluded to that fact.[3]

If you want to see the formula used to calculate Player Efficiency Ratings, check out the statistic’s Wikipedia page. Keep in mind, you don’t need to mess around with it since ESPN makes the data available on its site. 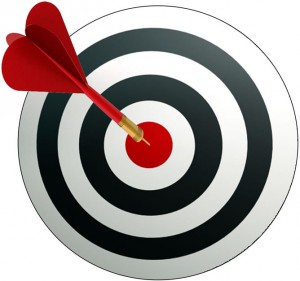 A player’s ability to sink shots is obviously a major part of his value to your roster. The problem is, it’s not always clear how to gauge that ability.

For example, visit this page at ESPN. You’ll see a column on the far right labeled “FG%” (field goal percentage). That number is not as useful as you might think. It reflects a player’s percentage of successful field goal attempts, but doesn’t distinguish between his 2-point and 3-point shots. Nor does it take into account his free throws.

To be sure, you can get a fair idea of a player’s shooting acumen by reviewing his FG% and free throw percentage (“FT%,” listed on this page). But there’s a better way to obtain the data you need to draft winners…

Review his true shooting percentage (“TS%”). It can be found here. It stems from a formula that takes into account 2-point field goals, 3-point field goals and free throws. Here’s the formula:

It looks complicated. But remember, you don’t have to actually do the math. ESPN gives you the data. How do you leverage it? Focus on players who have comparatively high numbers in the TS% column.

This statistic is often misunderstood. It reflects how often a player uses his team’s possessions. Because no player can possibly maintain a 100% hit rate (scoring fantasy points on every possession), you can expect a player’s efficiency score to decline as his usage percentage rises.

For example, let’s take a look at Luka Doncic’s usage percentages and player efficiency scores over the last few seasons. Here are the numbers, according to ESPN.com…

Notice that Doncic’s’ PER declined as his usage rate has risen. That’s not a coincidence. It’s an expectation.

The above numbers don’t tell the whole story, of course. They don’t take into account matchups, injuries and other important details. But they still offer insight. A player whose PER remains the same (or nearly so) as his usage percentage increases can be the stud who pushes your lineup to the top of the field.

This number is useful for determining how productive a given player has been over the last several games. It’s simple to calculate. Here’s the formula…

Use the average number of minutes played listed at ESPN. Divide that number by the average fantasy points per game (FPPG) posted at the fantasy site.

You can now use those numbers to compare Doncic’s’ production with that of other players at FanDuel and DraftKings.

Calculating how much money you’ll need to spend per point will reveal whether you’re spending your budget as smartly as possible. As above, the formula is very simple:

Let’s calculate this number for a few point guards (the following data are taken from DraftKings):

The above $PFPs provide useful information, especially if you’re trying to stretch your budget. As a little bit of an older example, there was a time when you could have rostered Thomas for just over half of Lowry’s salary. You’ll spend a lot less per point in the process.

The statistics we’ve covered above should influence your draft decisions.

Because it’s hard to argue with raw numbers. If those numbers point you to players who are more productive and efficient than their peers, you’ll stand a good chance of cashing in daily fantasy basketball contests.

Remember, a lot of your competition won’t go to the trouble. Leverage their laziness!

More Reading For You!